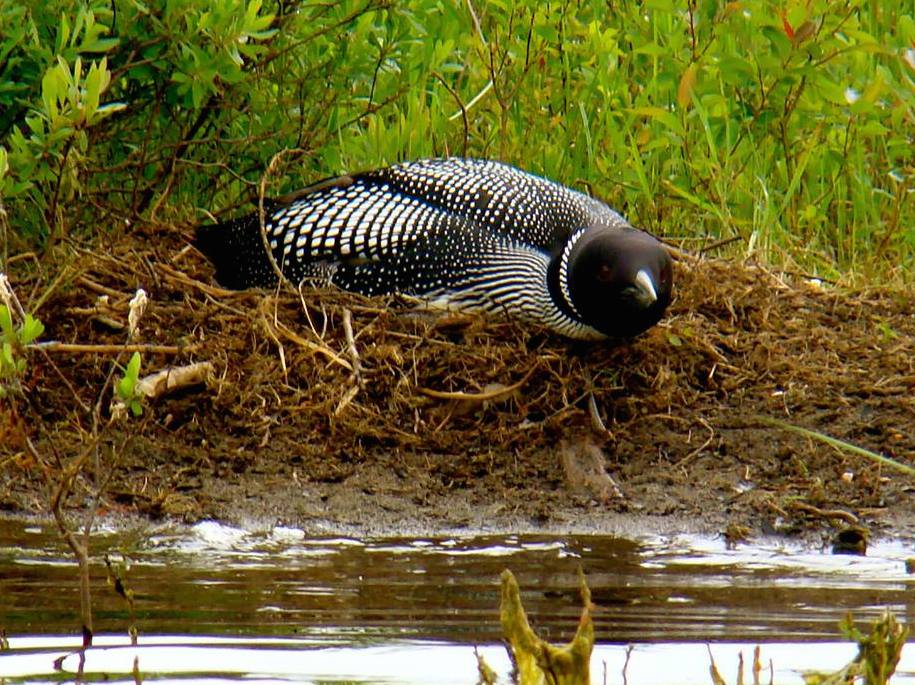 A Night in the Life…

It’s 2:00 AM and I’m leaning over the bow of a canoe, arms outstretched, holding a spotlight that’s jerry-rigged to a car battery and held together with duct tape. Scanning the spotlight back and forth across the surface of Lake Gloriette, I look up to see Dixville Notch looming above us, illuminated by the full August moon. By the time the boat makes what feels like the fifty-eighth circle around the lake, I’m sure my arms will be stuck in this position for the rest of my life. I comfort myself with the notion that if this wildlife biologist gig falls through, I can have a solid backup career as a wooden nautical figurehead on an old pirate ship. 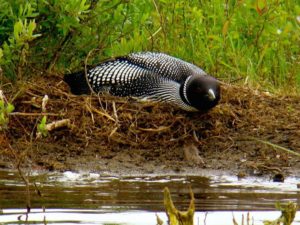 I’m pulled from the daydream by a glimpse of something familiar on the water in the distance. Ripples are dissipating out. Whatever it was has to come back up for air, so I concentrate the light there. A few moments pass until the inky black head of a common loon emerges, barely skulking above the water surface. I not so gently kick the senior biologist to alert him of our target, and he turns from admiring the constellations to playing hoots and yodel calls from a handheld speaker. The veterinary intern guides the boat towards the bird. Our coordinated effort to blind the bird with the bright light, play calls to keep it curious, and kill the engine with enough headway speed to coast in and net the elusive loon before it dives again is surprisingly successful. 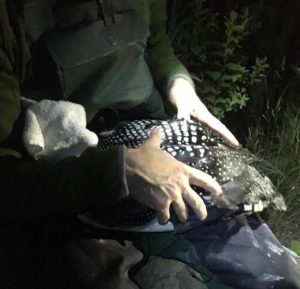 Back on shore, we begin the process of collecting samples. The loon’s head is wrapped in a towel and tucked under my arm to prevent him from using his ice pick of a bill to convince me to release him. There’s an icepack between my lap and the loon’s stomach to keep him from overheating. We pull three tail feathers, collect multiple vials of blood from the medial metatarsal vein, clip a wing feather, measure his bill length, width, and overlap/underbite, and tag him with a metal US Fish and Wildlife band and 3 plastic color bands for future identification. We record his weight, and note general body and plumage condition, before removing his blindfold and releasing him into the night. But our work is not finished. We will now attempt to capture his mate and their surviving 6-week old chick before we move on to repeat this scene at three more lakes before sunrise.

This is how I spent my nights last summer. This is a night in the life of a Loon Biologist.

During summer 2016, I worked as a field biologist with the Loon Preservation Committee. Our task that summer was to gather demographic information from the New Hampshire loon population, including resident occupancy, banded bird re-sights, nest attempts, and chick survival. This type of monitoring requires multiple field surveys of each lake early in the summer, and a critical part of the field surveys is the quality of the field notes you take. Knowing how old the chicks will be on the proposed capture night is crucial to ensure their safety and survival, and long-term behavioral observations of adult loons—where they forage, where the brooding area is, etc.—makes for efficient banding nights. But my note-taking certainly improved in both style and substance over the three short months I spent pond-hopping in the New Hampshire North Country.

In May, I was a minimalist. I might simply have jotted down location, date, time and a brief comment: “Observed one adult loon. Now I see a second adult.” These were the bare-bones facts. I soon realized that this wasn’t enough. Early on, the senior biologist asked countless questions about my field notes, revealing the absence of critical information: ‘You saw two adult loons foraging on this pond, but are they residents? Are they a breeding pair?’ If I had recorded behavioral notes—e.g., “tap the water with their bills when they’re close to each other” and “rise up and flap their wings when they’re close to each other”—I would have been able to make more informed judgment calls about whether or not the loons were exhibiting pair behavior. Instead, I found myself resurveying all of the sites where I’d employed my minimalist field-note method. 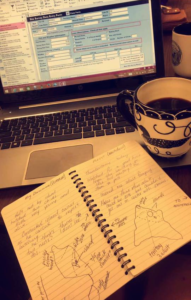 The best advice I can give to new field biologists, or fledgling naturalists, is to just keep writing. You never know what will be important when you’re back indoors. It’s easy to see the big events such as, the birds returned from migration, the bird is sitting on a nest, the chick hatched, yet it is often the subtle nuances of everyday behavior that can be the most valuable in answering research questions and spurring future projects. Notes that seem inconsequential at the time—Adult loon approaching nest. The black flies are relentless!—might later provide clues as to what caused a nest failure. Perhaps the loons, also bothered by the black flies, had to keep diving underwater for refuge, leaving the eggs vulnerable to predation?

The physical data collected during banding is vital to population monitoring, but thorough field notes are an invaluable contribution to fundraising, presentations, and grant proposals. Over the past four decades of research conducted by the Loon Preservation Committee, many summer field biologists have come and gone. What remains is a closet full of little yellow waterproof Rite in the Rain notebooks. This closet is El Dorado for new biologists—a wealth of information about where to find nests, which lakes are difficult to access, where to park, where to launch the boat, and even which camp owners will provide you lunch. You never know who will be reading your little yellow waterproof notes in 40 years. … Help your readers understand this corner of the world as you see it. Draw what you can, describe what you can’t, and channel your inner Thoreau.

“What’s up with the whale?”